More than 200 people attended the hearing on the proposed ordinance and zoning change held on Dec. 20, 2018, held at Elizabeth Forward Middle School.

Despite listening to more than three hours of public comment in opposition to the proposal, the Elizabeth Township Commissioners voted 4-3 to pass a controversial ordinance and zoning change that would allow construction of a power plant in a rural and residential neighborhood.

The proposed zoning text and map revisions were written by the Chicago-based energy company Invenergy LLC and rezones nearly 147 acres from rural and residential land to light industrial. The new industrial district would be located near the Youghiogheny River, Great Allegheny Passage, and neighborhood of Smithdale. The revision allows gas-fired power plants as a ‘permitted use’ in all industrial zones.

Permitted uses require the least review of any zoning permit approval process and are usually reserved for development that is unlikely to impact the surrounding community. Larger, and potentially more impactful operations, such as a power plant, often require a conditional use or special exception approval after review by entities such as a zoning hearing board, planning commission, or board of commissioners and must provide opportunities for public comment. On the other hand, permitted uses generally only require approval by the zoning officer and the public is never alerted of the proposed development.

All together, Invenergy is hoping the rezoning will allow them to build a 550-megawatt gas-fired power plant known as the Allegheny Energy Center in the newly designated industrial zone.

Over 200 people attended the public hearing, despite being held just 5 days before Christmas. More than 40 people testified in opposition to the proposed ordinance and zoning changes, with only 3 testifying in support. In addition, more than 15 residents from neighboring municipalities such as Sutersville and West Newton attempted to speak in opposition. However, all non-residents of Elizabeth Township were denied the chance to speak because of a public participation policy that the Commissioners voted in just 3 days before the hearing. Many of these community members live as close as ½ a mile away from the site of the proposed power plant.

Residents raised many concerns, including: changing the residential character of the township; hindering growth from tourism by creating an industrial zone along the GAP Trail; potential health risks from power plant emissions; impacts on the Youghiogheny River; risks of property subsidence from building on a heavily undermined area; declining property values; and the inability of the township to properly oversee such a large industrial operation. Those in attendance were also concerned that the Commissioners weren’t acting in the best interests of the community.

“You are supposed to represent your constituents – not private industry,” stated one resident, and the room erupted in applause.

In addition, attorney Dwight Ferguson received a standing ovation after his comments on behalf of several residents who would be impacted by the proposed changes. Notably, he pointed out that there have been no meeting minutes recorded where the Commissioners have discussed the proposal at hand, despite having been submitted in June of this year. As a result, said Ferguson, the Commissioners were violating the rights of their constituents by not meeting their fiduciary responsibility to inform themselves about the proposal and its potential impacts.

One legal challenge was immediately filed the following day, objecting to the Commissioner’s decision. The suit was brought on behalf of neighboring landowners and lists an array of statutory, common law, and constitutional violations they believe have been committed by the adoption of the new ordinance. If successful, the suit would invalidate the Commissioner’s decision entirely and no industrial development would be allowed at the site. 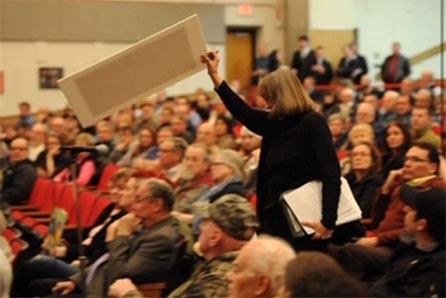